Some backstory to this doodle. I made this doodle a few months ago, kind of as my first attempt to tackle drawing my friends. The thought came to me while I was discussing my normally weird dreams with my friend Mark. He always winds up in my dreams doing something weird, or telling me to go somewhere, so he joked that he was my Indian Spirit Guide (a la Waynes World 2), and the image in my head was too funny to not jot down. Check out how the final version looks on my portfolio site. 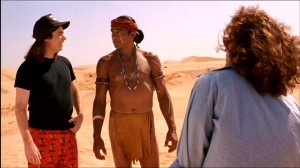 I included staples of his wardrobe (his oxblood doc martens and an orangey-plaid button up his girlfriend had dubbed his “i can’t quit you” shirt in college) and that made it pretty fun, mostly drawing the shirt. I haven’t seen it in years but I’m pretty sure I got the color scheme exactly right. It was one of my first re-drawings using my wacom bamboo tablet, so it was a little wobbly. I wound up using more color than outline, which I liked as well and used that style again when I doodled the republican candidates.

Because it was one of my first ones, I like looking back on it because it reminds me how much I learned when I just sat there with my wacom for an extended period of time. Being able to create characters on a sticky note and then being able to create them again via tablet is a hurdle for me. It’s almost like learning how to use a pen all over again. But it’s a reminder that if I keep playing it will eventually get loads easier.